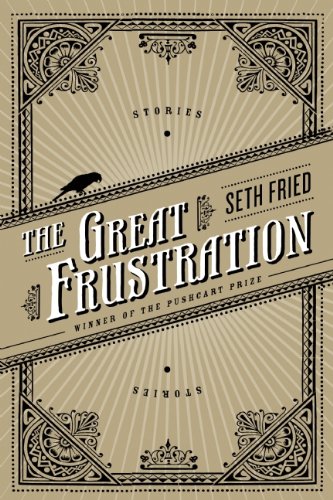 On April 29th, at our 2nd Annual Literary Debutante Ball, One Story will be celebrating five One Story authors who have published their debut books over the past year. As a lead up to the event, we thought it would be a fun idea to introduce our Debs through a series of interviews on their debut book experiences.

This week, we had the pleasure of speaking with Seth Fried, author of The Great Frustration (Soft Skull Press), a fantastic collection, due out next month, that includes the story he published with One Story, “Frost Mountain Picnic Massacre.“

The Great Frustration is a sparkling debut, equal parts fable and wry satire. Seth Fried balances the dark—a town besieged, a yearly massacre, the harem of a pathological king—with moments of sweet optimism—researchers unexpectedly inspired by discovery, the triumph of a doomed monkey, the big implications found in a series of tiny creatures. Fried’s stories suggest that we are at our most compelling and human when wrestling with the most frustrating aspects of both the world around us and of our very own natures.

1) How did you celebrate when you found out your first book was going to be published?

I was traveling with friends in Colombia when I got the news. We had just finished a rafting trip on the Rio Chicamocha near San Gil and had headed north to Cúcuta. We arrived in the evening, and when I checked my messages I found out that Soft Skull had agreed to publish my book. It just so happened that our arrival coincided with a local festival, so my friends and I commemorated the news by joining in the celebrations. We all drank lots of aguardiente, laughed, and sang songs until the sun came up.

Kidding. I’ve never done anything even remotely like that. The above anecdote was pieced together using Wikipedia.

Here is what actually happened: I randomly woke up one day at five in the morning. I stumbled over to my computer in my underwear and found an email waiting for me from my agent telling me that Soft Skull wanted to publish The Great Frustration (she usually calls with good news, but was traveling at the time). I nodded approvingly, and then went back to bed for a celebratory six more hours of sleep.

Lots of stuff. Appearing in One Story is a very unique experience. By the time “Frost Mountain Picnic Massacre” was getting ready to come out, I had already been lucky enough to have published work in some of my favorite magazines. So I figured I was more or less prepared for what it would be like to have something run in One Story. But unlike other magazines, One Story has everyone reading just your story. The response ends up being sort of overwhelming. When “Frost Mountain” appeared, I had more people approach me about my writing in just that first week than I ever had before. The story was eventually awarded a Pushcart Prize, short-listed in Best American Short Stories, and anthologized in The Year’s Best Dark Fantasy and Horror 2010. So yeah, lots of stuff. I’m incredibly grateful to One Story and am convinced that the success of “Frost Mountain” was a significant help in finding my book a home.

3) During the editing of, The Great Frustration, was there any single piece of advice you received or perhaps remembered from earlier in your career that helped ease the process?

I’m not sure if this is something I came up with myself or something someone told me: Whether you’re working with a book editor or a magazine editor, I think it’s a great idea to wait a while before responding to edits (time permitting). I routinely break this rule and am routinely embarrassed after the fact. I end up sending these really passionate emails about stuff that doesn’t matter. When I wait to respond, I usually end up seeing the value in a suggestion or coming up with an effective compromise.

4) You do a great job of staying connected with your readers through fun material like story trailers on your blog. If you were inclined to make a trailer for your career so far, what do you think it might look like?

5) What are you looking forward to the most about the One Story Literary Debutante Ball on April 29th?

I went to the ball last year and this happened: I was having an animated conversation with my friend and I gesticulated in such a way that I accidentally threw my beer bottle onto the ground. Fortunately it was empty, but I still had to pick up shards of glass while pretty much every writer I’ve ever heard of watched me. So this year I’m really looking forward to that not happening.

Also, the ball was a lot of fun in general. I’m looking forward to catching up with all the cool people I met last year and meeting some new people as well. With any luck no one will ask me, “Hey, aren’t you beer bottle guy?”

For more information about The Great Frustration , check out Soft Skull’s website. Or read more about Seth at his author website, Seth Fried’s Bare-Minimum-Blog Blog.